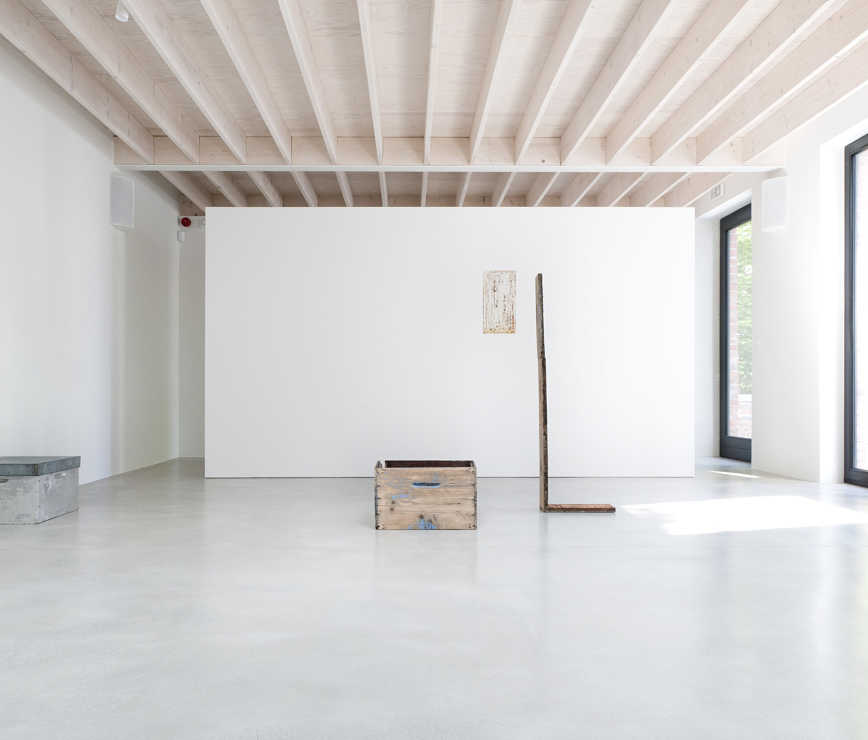 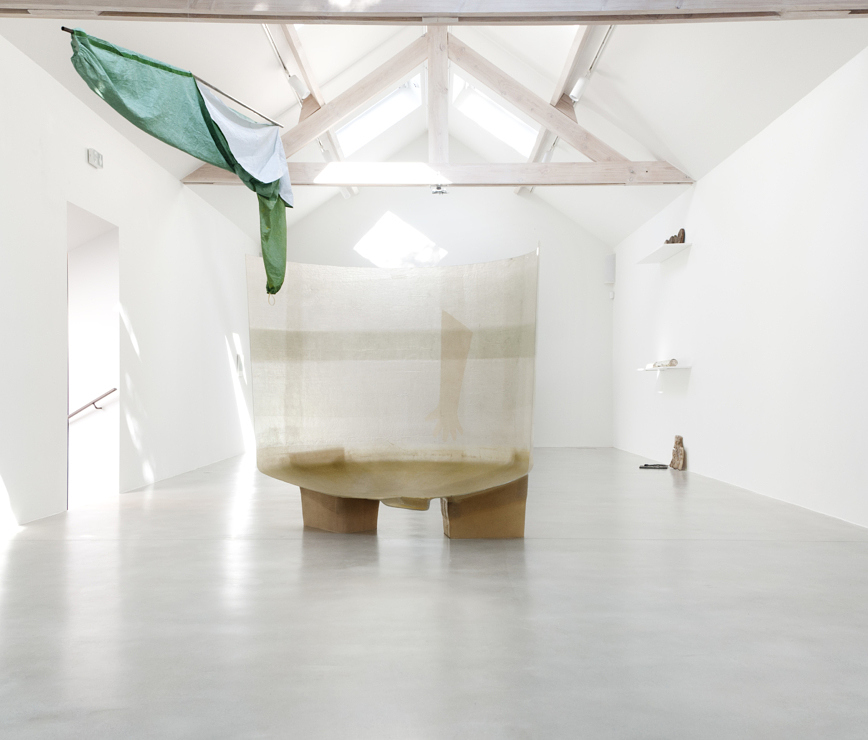 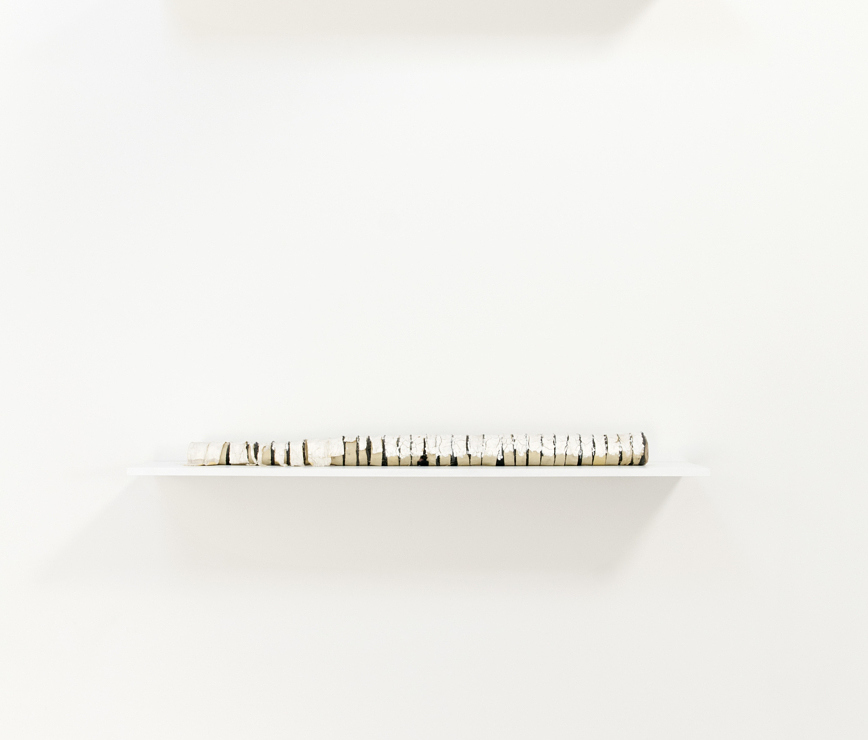 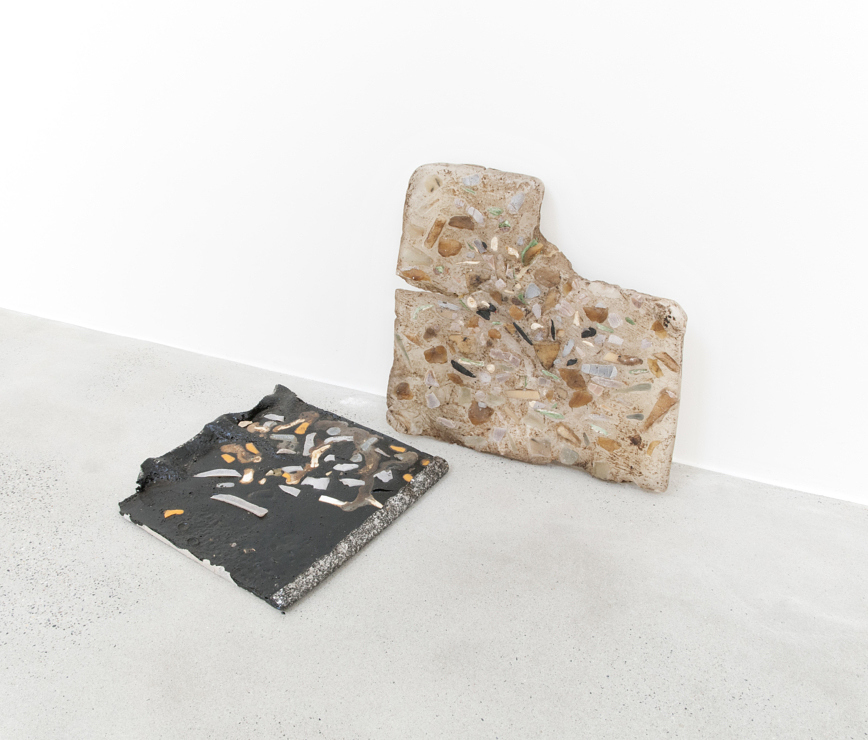 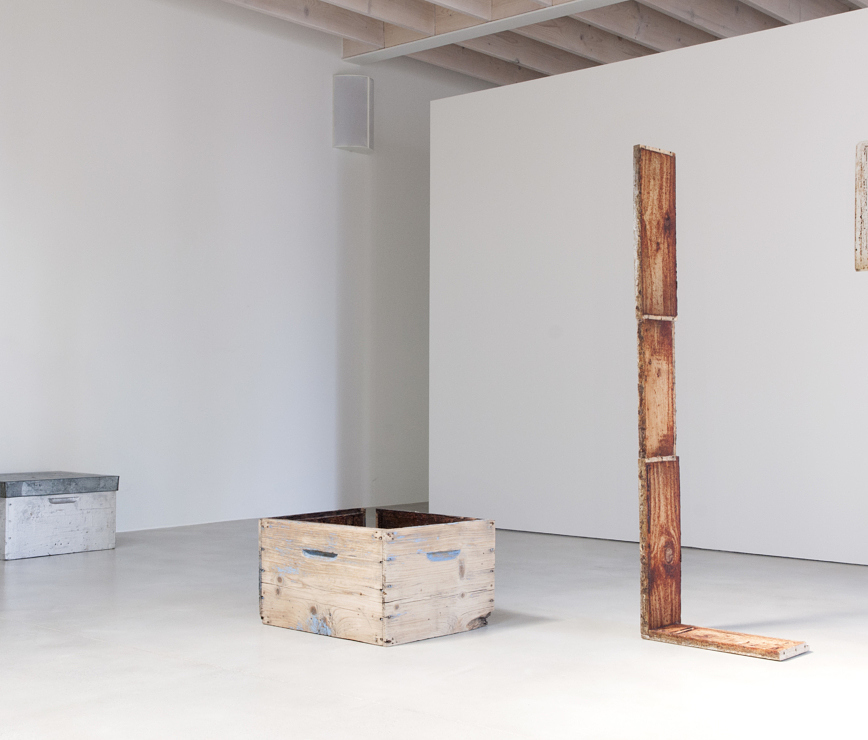 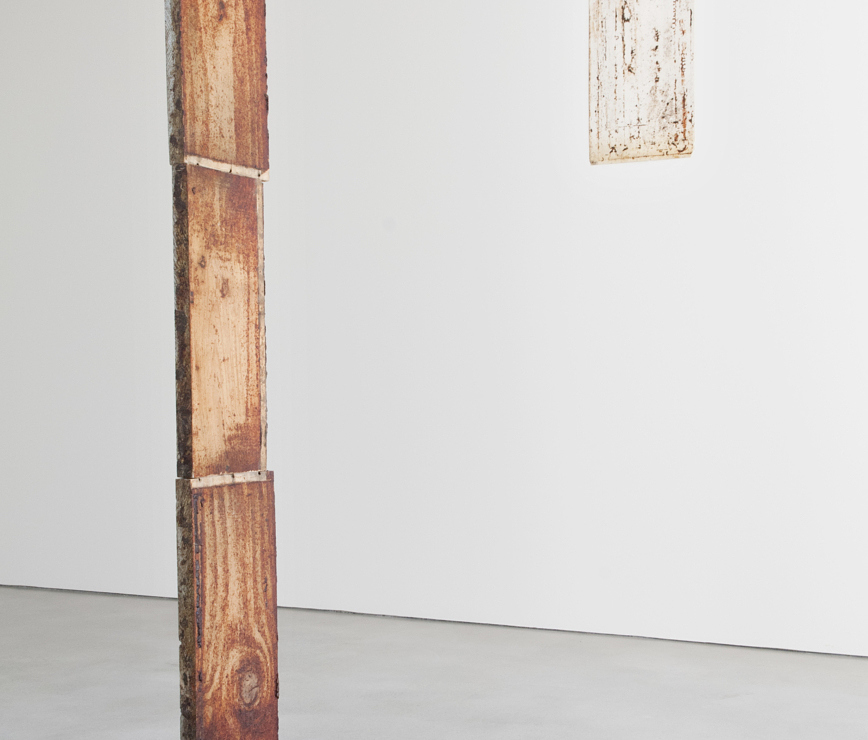 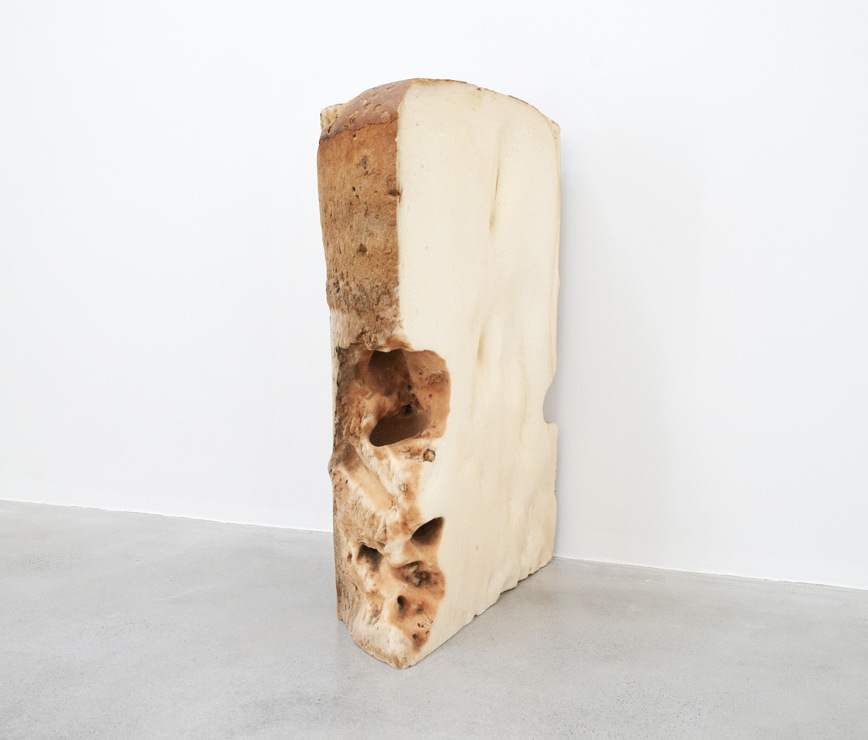 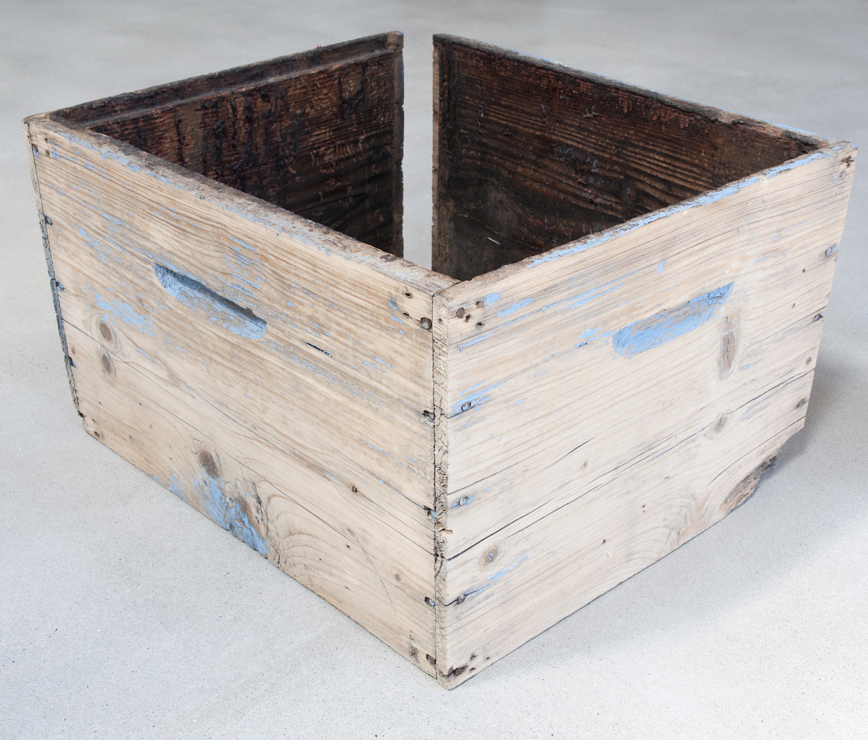 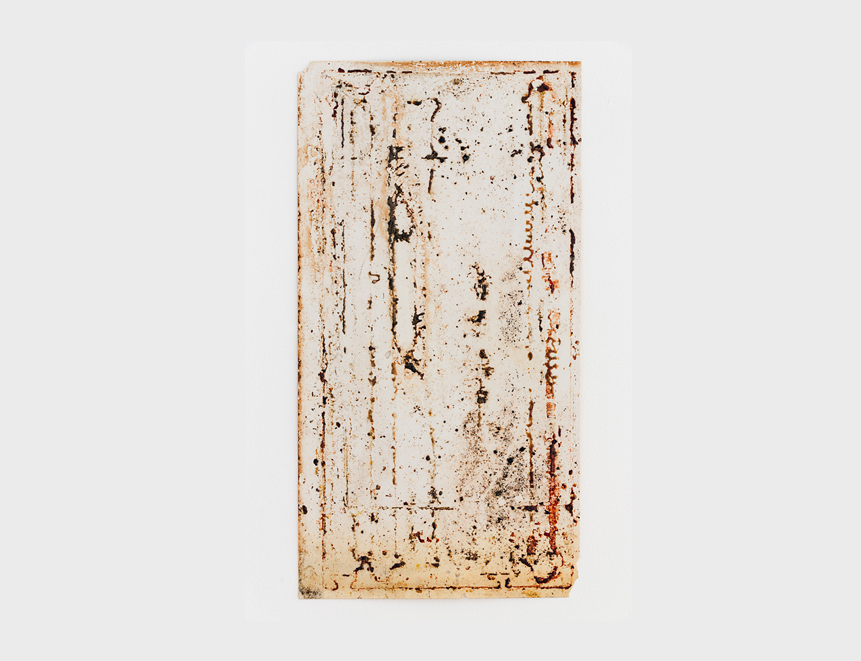 The foundation invites Hemali Bhuta (India) and Gyan Panchal (France) for the first time in Brussels to a dialogue between their works, echoing the thematic of the residence: the degrowth in art.
A history of gestures rather than a history of shapes that questions our relationship to the world and where the exhibited artworks examine notions such as wear and obsolescence.
The two artists assign a poetic reading and a singular attention to the pieces. These founded and recovered materials, transformed to the minimum level question our responsibility in the cycle of life of the objects that surround us.
A dialogue takes place between these two artistic practices. Both are in the continuation of Arte Povera and processual art, and are sustained by historical and contemporary references, let’s quote Barry Le Va for Gyan Panchal and Eva Hesse or Nasreen Mohamedi  for Hemali Bhuta.

“I consider the notion of degrowth at large as a modification of the relationship to the world, that would not take place in a relation of predation towards its resource anymore, but in a covenant relationship with all life forms. These questions are at stake everywhere, and particularly in the Limousin.”, underlines Gyan Panchal, who lives and works in this region.
Le qui des choses is an invitation to share experiences convoking a multitude of gestures, of ways of looking and touching, experiences that express themselves through a certain shape, sometimes accidental.

Hemali Bhuta (1978, Mumbai), lives and works in Mumbai, India
Her work is an exploration of working processes and tactile qualities of daily objects, as the possibility to turn them into artworks.
Presented for the exhibition «Indian Highway» at the Museum for contemporary art in Lyon in 2011, Hemali Bhuta has since exhibited in various art centers and galleries all around the world including Parasol Unit and Arken Museum of Modern Art (UK), Yorkshire Sculpture Park, Shanghai Biennale, Montalvo Arts Centre (USA), and in 2018, at the International Center of Art and Landscape of Vassivière in France for the exhibition «Subarnarekha» (La ligne d’or) revealing sculptures recalling traditional crafts technique.
Hemali Bhuta studied painting and design, she also founded the CONA Foundation, an artist-run space based in Mumbai.
She is represented by Project 88 Gallery in Mumbai

Press release of the exhibition

This exhibition is an invitation to a dialogue between your two artistic practices, what does it question fundamentally?
Hemali Bhuta: Fundamentally, I think it questions our own practices to begin with and also of the other. So the dialogue in ways is not to be in agreement to the other but also to provoke the other. The works may seem silently laying themselves, deceptively sublime in the exhibition space but they hide within them the most grotesque, the violent beast, propositions of instability, of discomfort. I definitely don’t want to make commodities for easy consumption and freeze them in a time capsule of sorts. I want to let them live and evolve and grow and always let them in the state of becoming.

Gyan Panchal: This sculpture can embody the possibility of an encounter between different human and non-human environments. I think that if this dialogue happens, it can allow us to question also a certain relation of property to materials that surrounds us and that we reduce to answers to our needs, forgetting though that there are things that does not belong to anyone and that escape from our desire to assign to them a name and a use. The work of Hemali seems to me to tirelessly bring into play everything that could freeze in the work. The matters are invested with plenty of attention, and her gestures talk to me about brutality but also the cure that we can bring to sculpture. In this way, it can happen again, but in an almost stranger manner than it used to be.

You are both of Indian origin, what do you read about your artistic practice in this territory you have in common? Does it matter and in what sense?
Hemali Bhuta: To be bracketed into something restricts one’s ability to see outside of it. These are the agendas of the systems of power but why not be in this constant drift that they can’t grasp much of it and that you allow yourself, your work to slip away.

The idea of being abandoned is beautiful where nobody wants to claim possession of you. You want to disown something but what if that something in fact disowns you before you could realize it. It happens many a times with my work, that I allow this constant game of abandonment between me and the work. Not because we are not committed to each other, rather it’s the opposite that allows for this abandonment of the other.

Gyan Panchal: For me, there is no difference between my practice here and in India. My approach remains the same, no matter if it takes place in a rural or an urban environment. I pay attention to the said of the outside. I welcome the who of things.

How does it resonate according to globalization and environmental uncertainty that it can generate? What kind of ecology do you organize with each of your artistic practice?
Hemali Bhuta: Artists thrive on the idea of uncertainty, give it environmental, political, social, economic in the hope of this utopia but what if we reach the state of certainty, then would we look back and find ways of addressing the uncertainties of the past or we shall start painting beautiful landscapes?

I am more invested in the seduction by the withheld information where something gets triggered and one doesn’t understand quite what it is but is indeed something lovely in not understanding of it.

I never want to illustrate and explain my work in ways where the listener or viewer is trapped in its contextual glory rather it doesn’t draw attention to itself and in the process of doing so, it is being seen.

Gyan Panchal: In a certain way, we could say that I take objects abandoned that I attempt to put back into play in the cycle of art economy. This has never been a program. The artwork “The Encounter” is for example the fortuitous meeting between a wheel glass wool plaque and some dried sunflower petals. An insulating material allowing to catch a certain heat, and the rests of a plant from which we pulled the energy, evoking the possibility of a dialogue, a contact between these two distinct worlds. The wool recalls the propolis’s trace created by the bees to seal their hive, a kind of writing from which I composed this piece.

The exhibition deals with the theme of our new residency program: the ecological transition.  What does this subject evoke you?
Hemali Bhuta: Trishankhu, a mythological character who was suspended in between heaven and earth, as a curse for his desire and greed to visit the heavens in his mortal form. Lord Indra didn’t permit him to enter into the heavens for it was against the law of nature whilst the sage who was responsible to have transported him there couldn’t bare the fact that his power was being challenged by the Gods and hence he suspended Trishankhu mid air upside down but also constructed a parallel heaven for the past king Trishankhu to live and rule there ever after.

The above story, with all its multi readings, that of how we come to be where we come to be, what brings us where we are and displaces our notions of suspension itself, where it transits into a new parallel environment.

Gyan Panchal: The relationship to the living has in my sense less a form of a transition than a clear separation with some models that attempt to persist under the green varnish of our time.

Regarding the works presented, what was your main source of inspiration?
Gyan Panchal: My daily life in the rural environment, in contact with what is not looking towards us.

I want to lay my work more as emotional beings, as experiments, as gestures, sometimes tests, tools, proposals, maquettes, afterthoughts, aftermaths, impressions rather than the work itself. So they are everything but the work, all that is around it, before it and after it, outside of it. Would it still hold the value of being the artworks?